The Story of EtonHouse 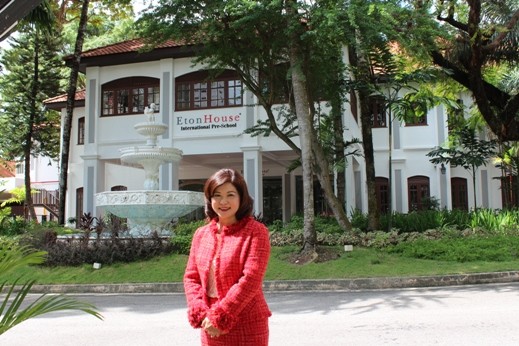 EtonHouse has an interesting history. The idea of a quality international school in Singapore based on the British learning system is the brainchild of the founder Mrs Ng Gim Choo, when she accompanied her husband on assignment to London in the 1980s. In those days whilst living in London they had two young children, a girl aged 4 and a boy aged 2, living away from Singapore for the first time in their lives.

Quite naturally one of the primary concerns of the parents was to find a quality nursery and pre-school learning centre with a stimulating environment in which to place the two young children.

After careful consideration, a suitable school was identified. To the parents' delight the children settled in far more quickly than expected.

After only a short period, it was very obvious that both children were extremely happy, mixing well with their new friends and stimulated by the various school activities. After a further period of monitoring their children’s progress, the parents were very much impressed by how much their children enjoyed going to school and excitedly talked about what they did at school.

Furthermore, the children were disappointed when the school holidays came round, preferring instead the learning activities and social interaction they had with their friends in school. The stimulus offered by the school, whether it was intellectual or social appeared far superior to that offered in Singapore at that time. It became quite obvious that the British Pre-School system had an appeal not currently available back home.

The founder was so impressed by the operation and management methods of that school in London that she decided she would consider establishing a similar school on returning to Singapore. Much research, care and planning was needed to create a similar learning environment and to offer the curriculum and learning approach of the British system. The business model for such a school was important but what was more critical was the enthusiasm, motivation and passion needed to be successful in attracting a discerning local and expatriate community.

In 1995, EtonHouse set up its first Pre-School at Broadrick Road in Singapore. The school was well received by parents. It gave so much pride and satisfaction to the owners, when parents came forward and told the school management that their children asked to go to school on weekends. It is also a matter of pride that Mrs. Ng’s daughter E-Ching who was the inspiration behind EtonHouse has obtained her PhD from the Yale University.

For more than two decades, parents have valued the high quality of research-based inquiry programme provided by EtonHouse. Building on continual support from parents together with its strong commitment to the pursuit of excellence and leadership in education services, EtonHouse has been expanding both locally and internationally. It now runs more than 100 schools in 12 countries across Singapore, China, India, Indonesia, Korea, Japan, Malaysia, Cambodia, Vietnam, Hong Kong, Myanmar, Kazakhstan and Middle East. With a sustained demand for high quality education, the group has plans to expand further across Asia and beyond. Hear from experts and other parents on how to encourage positive behavior; read about research and strategies on child development and navigate the digital landscape as a parent. Read More here